So after our false starts we decided to drive for a few extra hours and change our overnight destination from Dubbo to Wagga Wagga. We arrived in Wagga Wagga a little after 8pm and used our Wikicamp app to guide us to a free camp close to town for a quick overnight stop. The free camp had basic facilities and enough room for us to not camp on top of our neighbours and head off early in the morning without disturbing anyone. We had a smooth quick set up (I think we were too emotionally spent to argue with each other), a quick dinner of hot dogs then went to sleep after a pretty crappy start to the day.

Thankfully we had set the bed fly awnings up, as when we got up it was freezing with a thick covering of fog. After checking the canvas was dry underneath the bed flys, we had a quick breakfast and pack up and we were off by 9am, heading towards Goondiwindi, roughly an eight/ nine hour drive north. Thankfully todays drive was uneventful except for the constant roadworks along the Newell Highway. We had planned to stay overnight at the Goondiwindi Showgrounds, but our friends the McAuley’s had messaged us saying that they were staying at one of the caravan parks there, so we decided to use a gift voucher Nik’s parents had given us and stay there as well. Thank goodness we decided to stay at the caravan park as when we drove past the showground we noticed it was full of P plater utes and cars and drunk, half naked young men and women who were there for the annual ‘bachelor and spinsters’ ball. Now that would have been awkward!!!!!!

Once again we had an uneventful set up and pack up and were back on the road at 9am, on our way to our destination. We arrived at the BIG 4 Maroochypalms at about 4pm, we managed to squeeze our way onto our site and while we set up we let the kids go off exploring the playground, pool, mini golf and games room. Then before Nik had the chance to crack a beer we were off to the Mooloolaba surf club for our pre camp dinner and meeting. 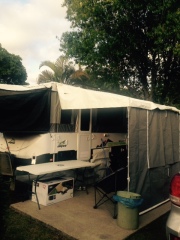 The week in QLD was very busy with the girls having training at the beach from 8am till 12, then back again at 4pm till 6pm. We decided to have the Wednesday morning off training and as Nik was bedridden with tonsillitis, the girls and I headed off early to the Eumundi Markets along with the rest of QLD. We spoilt ourselves with some yummy treats and all got a henna tattoo, and headed back to camp about 11ish, right when the crowds were getting ridiculous. 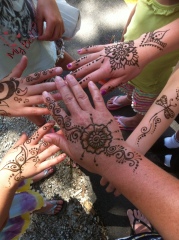 After the camp finished on Friday we went to Australia Zoo on Saturday and had a ball, they do a great job with the show in the crocoseum and the zoo grounds were beautiful. 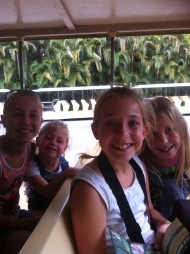 Overall the van performed well and we were very comfortable during the week even though it got a bit cramped when we were all in the kitchen together, which meant I was more than happy to get out. We had taken the swags for the older girls who used them once and then decided that instead they wanted to sleep in with us……… Therefore first item on the list, two top quality padded stretcher beds!!!!!!! That list preceded to grow over the next couple of days too, as we saw and got different ideas from other travellers along the way. One particular idea I saw was whilst I was eating my ham salad roll swinging on the swing at a park in Batemans bay!!!! Nik also got some ideas but was a little more intrusive than I and pretty much went up to people and asked for a tour of their van……….