We left Venus Bay, arriving at Murphy’s Haystacks, where we got out to stretch our legs and explore. The tourism brochures highlight the haystacks as 1500 million year old geographical wonders. They were pretty cool too, we managed to take a few photos and walk around for a bit until the flies got the better of us and we retreated back to the luxury of the car. After leaving Murphy’s Haystacks we headed to our next stop, Streaky Bay, where we had a few exciting things planned. Firstly it was grand final weekend so of course we required power for the TV and secondly we had a very important booking we had to keep…..

And so the day we had been talking about for the last 9 months had finally arrived, we were going to swim with the sea lions and dolphins at Baird Bay. We were all very excited about this day, we had specifically decided during our years of planning to come back down south from Alice Springs to do the Eyre Peninsula and in particular the Baird Bay Ocean Eco Experience, which says a lot considering that we (OK more so me, Amy) had to endure some pretty cold weather…….. So on a beautifully hot sunny day we rolled into Baird Bay, which has a population of 3 (being the 2 owners of the eco business and another guy who loves to fish), we drove past a couple of old fishing shacks not entirely sure where the ‘office’ was. We drove down a dirt road a bit further and all of a sudden came upon 2 gorgeous modern sandstone houses and the office, which was set up like a café with air conditioning, polished concrete floors and ice creams and coffee!!! The 2 houses were set up as accommodation to rent, with the owners living in a very modest fishing shack next door to the office, all in all it was a great set up, which blended into the surrounds with ease. But enough of the architecture, we were about to jump in the water (read FREEZING) and swim with the sea lions and dolphins. Whilst Nik did the boring stuff like paying, the girls and I squeezed (OK, more so me) into our wetsuits, with Zoe so excited that she twice had to get back out of hers and go to the toilet.

As well as us there were 2 other families along for the ride, so we all piled into the boat and headed out to the sea lions first, about a 10 minute boat ride. The sea lions were amazing, they are like little kids and simply wanted to come and play, so we were instructed to keep duck diving down and twisting around and generally look like we wanted to play with them. The water was FREEZING, Nik and the girls took it in their stride while every time I put my head underwater I had to concentrate on breathing and not hyperventilating because of the cold!!!! Needless to say, my snorkelling technique then suffered as I coughed and spluttered my way through the water in search of a playmate. Understandably the sea lions didn’t come too close to me, but they were having a great time interacting with the girls and Nik, darting here and there, somersaulting and even picking up crabs and eating them off the ocean floor. After a while Jess and I got out (thank god she wanted to as I was going to have skulk back to the boat by myself), whilst the others stayed in for another 20 minutes having fun. They got some great footage underwater and thankfully the temperature that day was in the 30’s, with a warm northerly wind, so when they got out they were able to warm up a bit whilst we headed out to the deeper channel to meet the dolphins. 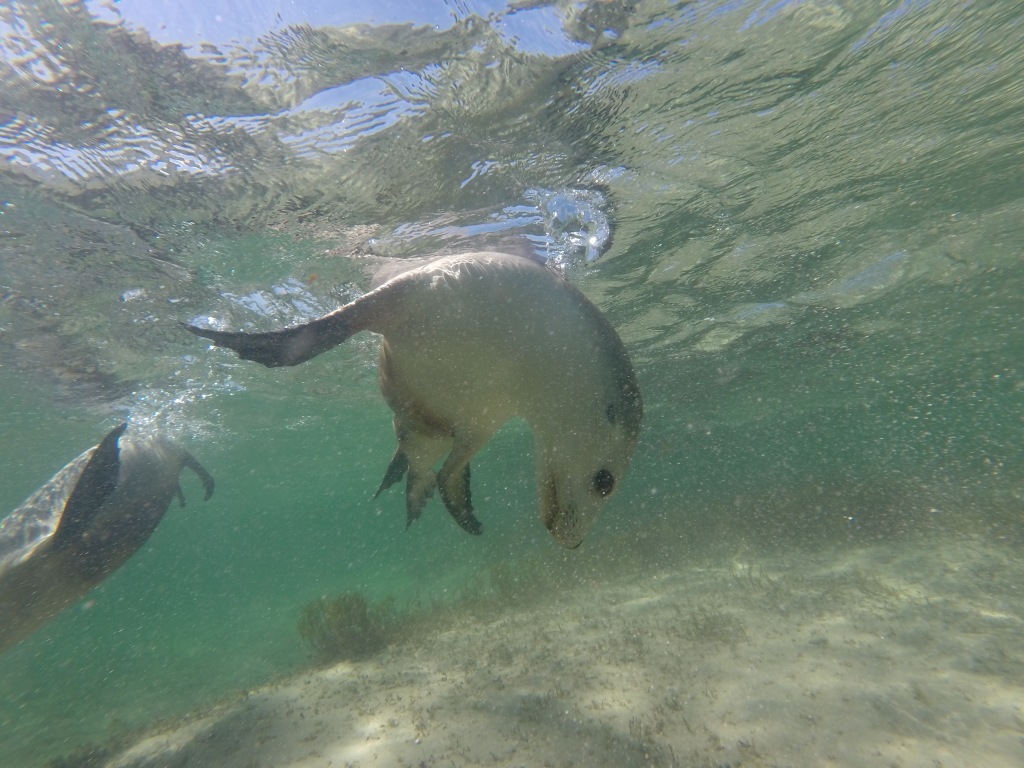 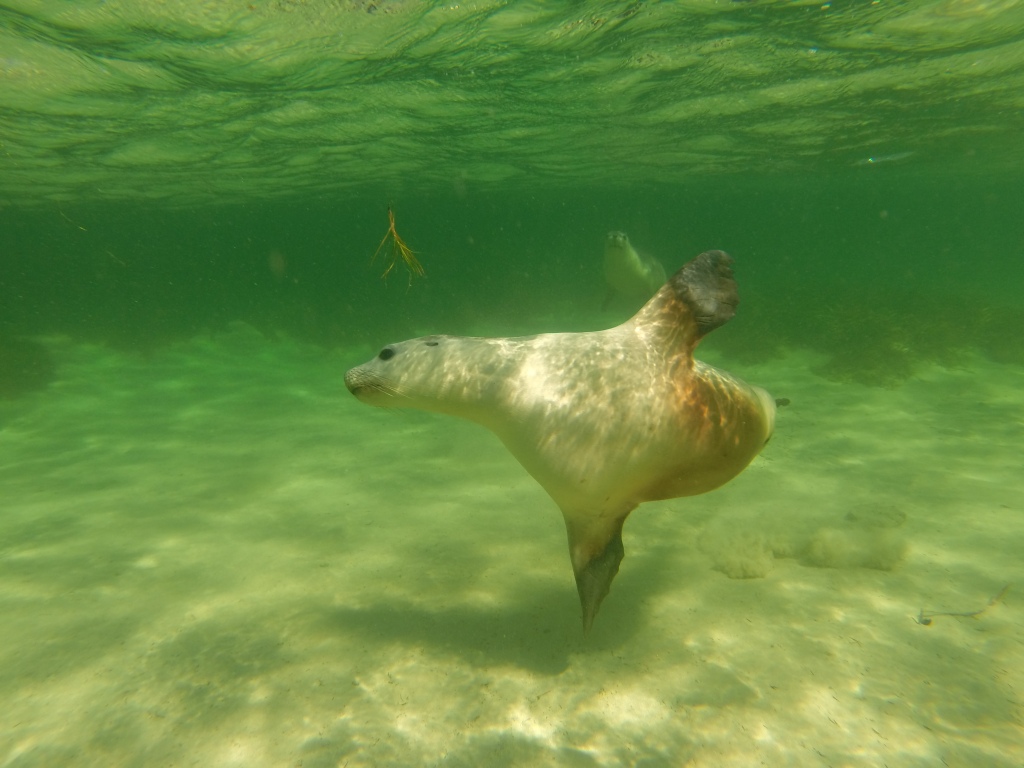 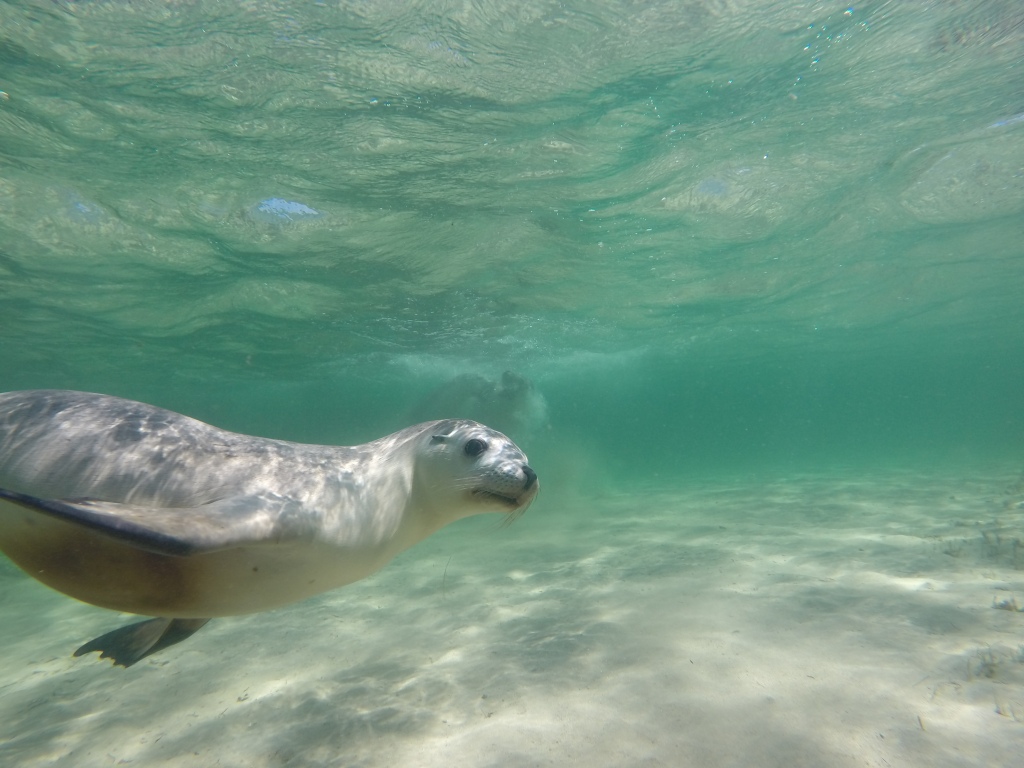 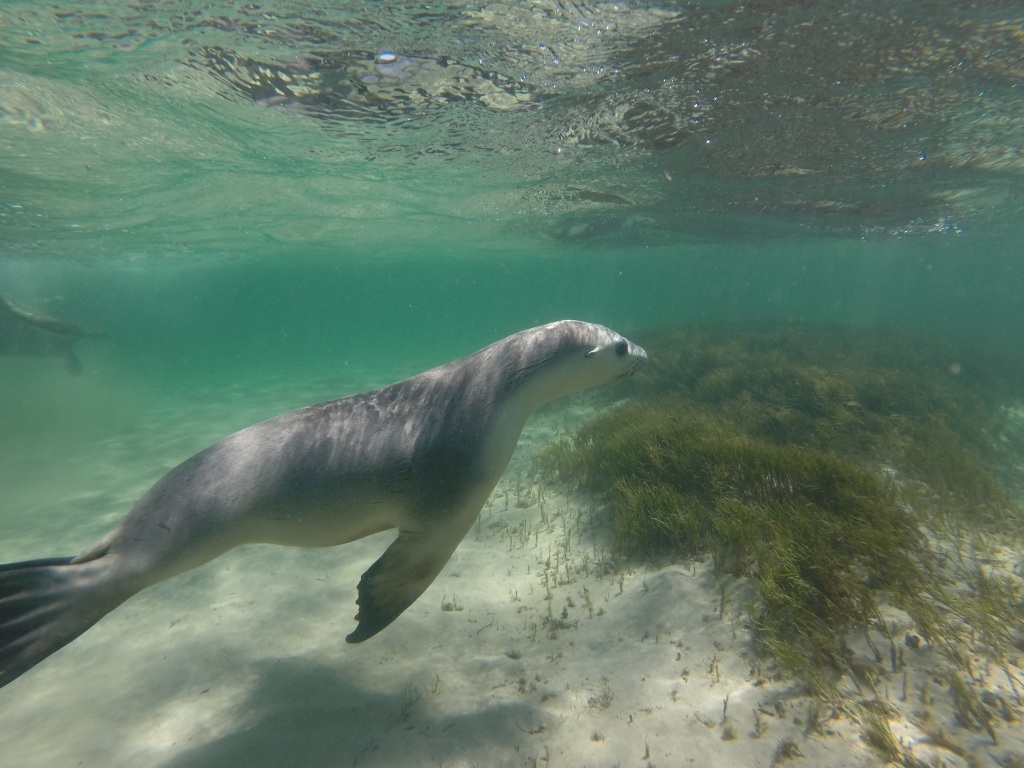 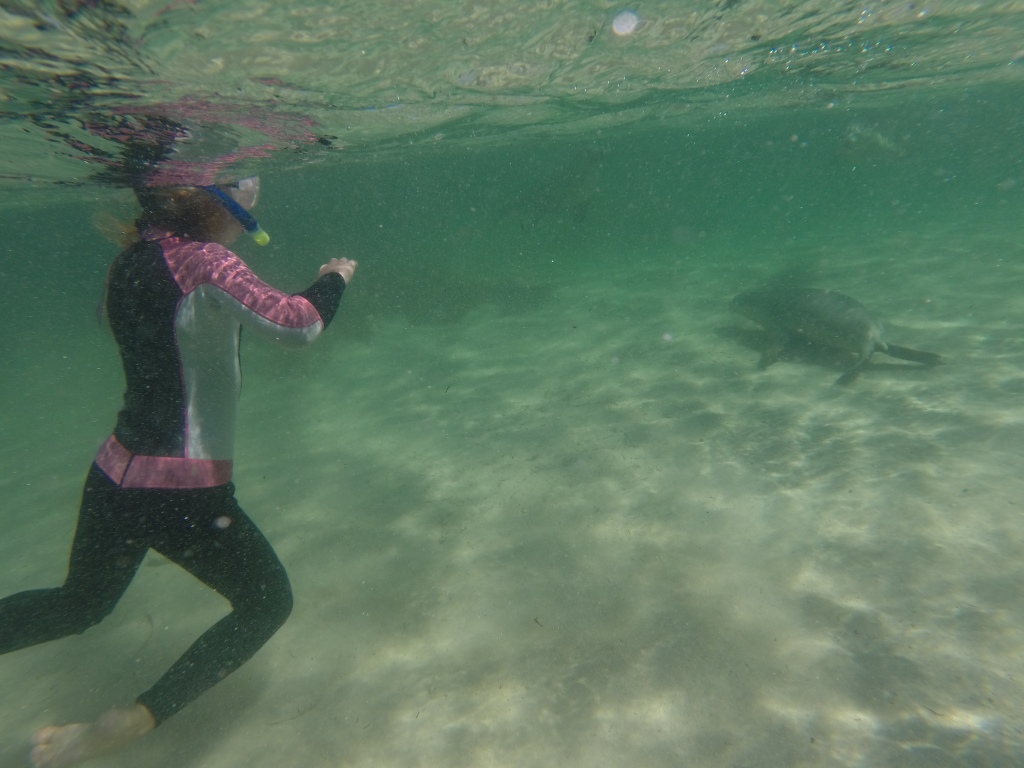 As we reached the dolphins, Alan (the owner and our guide) told us we needed to be quick getting in the water otherwise the dolphins would get bored and swim away, so as soon as we stopped everyone jumped in, while the dolphins were swimming around. The dolphins were exactly like the sea lions in that they just wanted to play, also Alan pointed out the surf was low today so they were looking for other things to play with, and thankfully, a very eager boat load of tourists including 4 excited girls had turned up. As the swimmers swam, Alan watches them and every couple of minutes drives the boat around the group in a big circle with the dolphins chasing the boat, then when it stops the dolphins play with the swimmers. All I could hear was Nik and the girls squealing (Please note: Nik wants to point out he was laughing not squealing…) as the dolphins swam in circles around them all and were coming within arm’s reach of them, one particular dolphin was swimming around Nik and Zoe having a great time while I’m sure Zoe was having heart palpitations, she was so excited. Jess hopped out after 5 minutes as she got a bit scared, the water was pretty deep, dark and cold and I think she was surprised at how big they were. She later mentioned to me that she thought they were so big and that she thought that perhaps they were sharks dressed in dolphins costumes and they were going to eat her (mmmm perhaps watching the movie, Soul Surfer, about the Hawaiian surfer Bethany Hamilton who lost her arm to a shark, the day before wasn’t a great idea…………). However everyone else agreed saying they were very big, we were all actually surprised at how massive they were and also about how many marks and battle scars they had on their bodies. Then Alan told us, thankfully in hindsight, that quite a few of them had had a few run ins over the years with the great whites out of the bay. 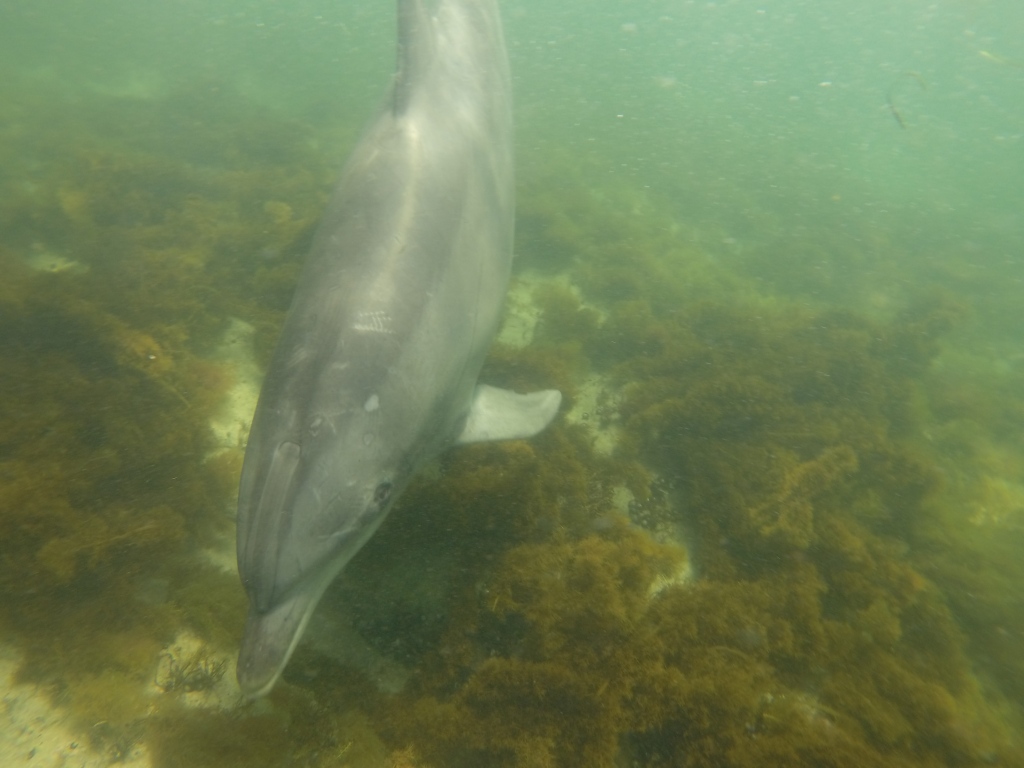 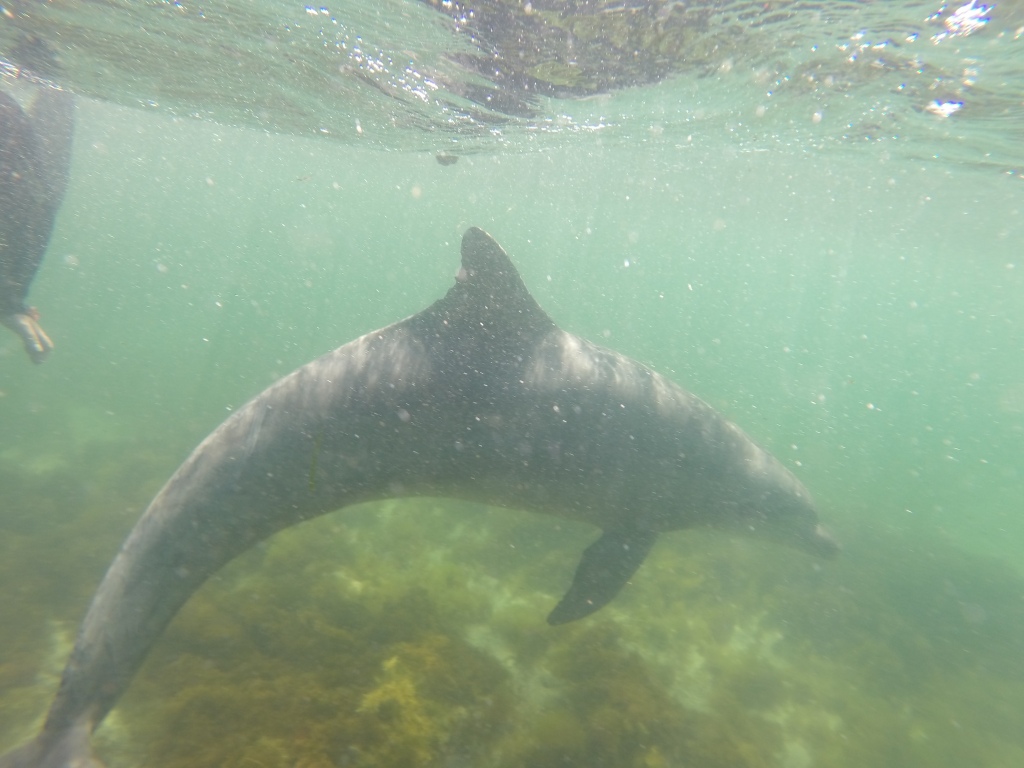 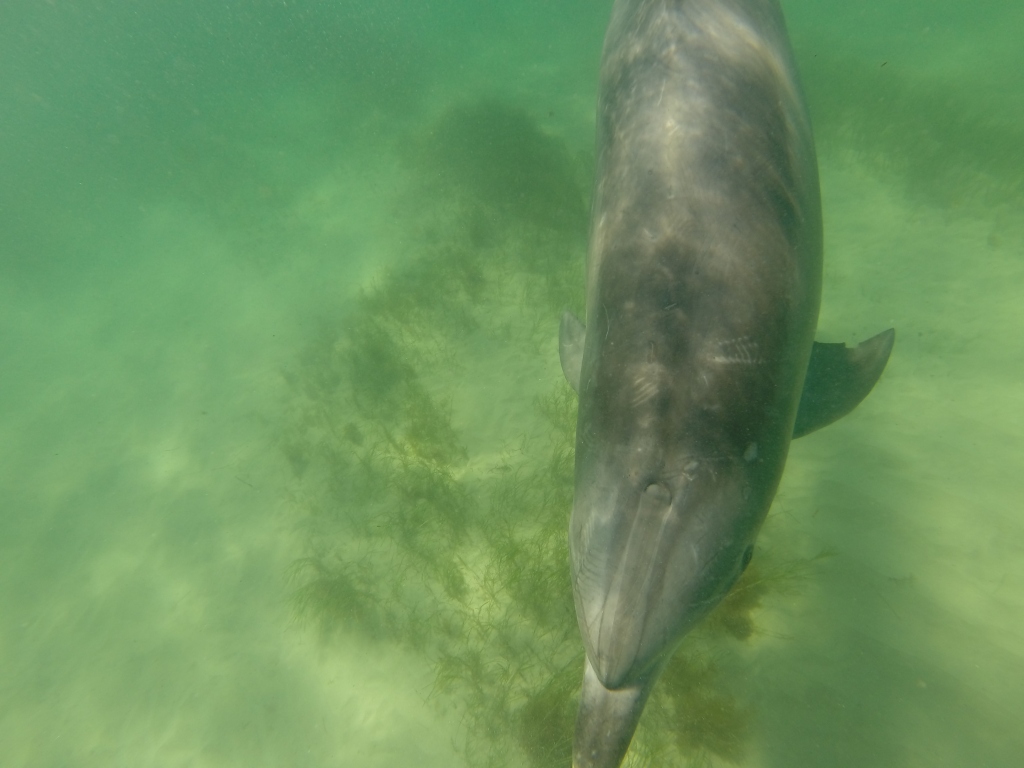 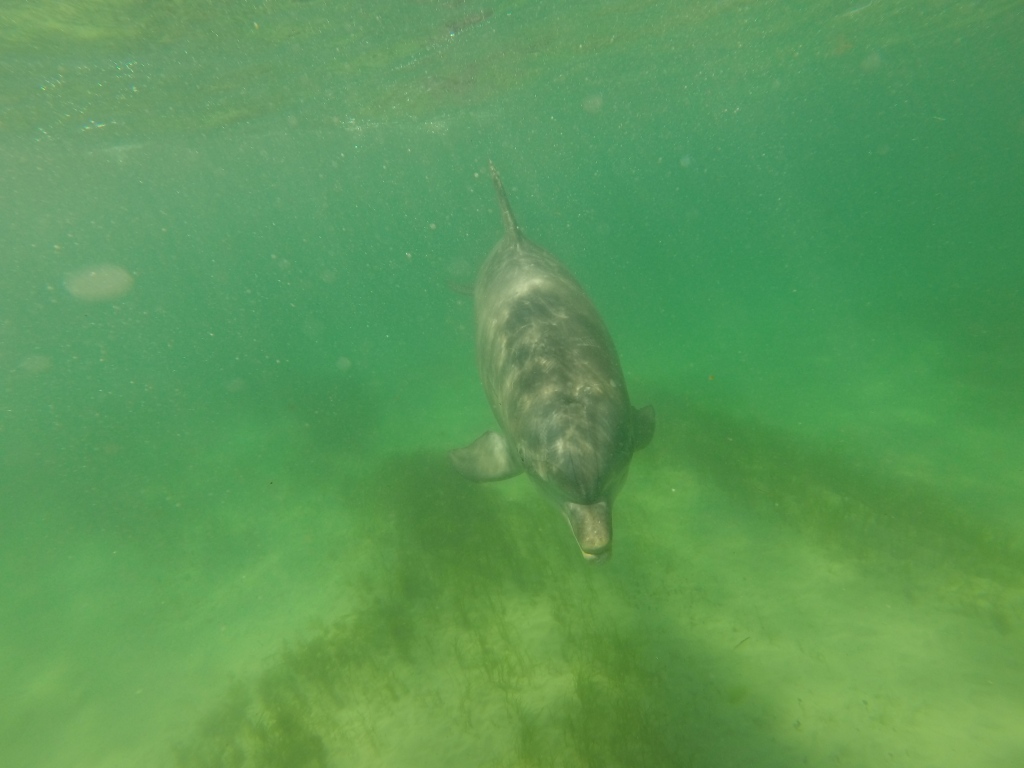 After playing and swimming with the dolphins Alan drove the boat back to the sea lions island home and we had some morning tea and hot milo to warm up, then headed in for another swim with the sea lions. Whilst Nik and the girls swam I sat and talked to Alan about how this all got started and how it all works, it was very interesting. Alan and his wife Trish, over time have even had to save a few sea lion pups and bring them in to look after them, a few have been successfully released back into the wild, however one in particular hasn’t and has been a permanent resident at Seaworld ever since. It was very obvious how passionate they both are about the wildlife and ocean around Baird Bay, the experience is done in an extremely safe environmentally friendly method that does not interfere with or encroach on the animals, we are instructed to NOT touch them, if they want to swim to us that’s fine, but no chasing or touching them. So finally after 4 ½ hours out on the water we headed back into shore, where we decided to splurge and buy the kids some ice creams, which meant that I had to have a coffee……

We had a great day, it was by far the best thing we have experienced on this trip. Yes it wasn’t cheap, but it was well worth the money, Alan was even kind enough to not charge us for Jesse, as ‘there wasn’t that much of her!!!!’ We would recommend it to EVERYONE, even so much as going to the Eyre Peninsula just to do this.

After our awesome experience, we headed back to Streaky Bay, where we spent the weekend watching the AFL grand final, swimming and fishing off the jetty and just relaxing and reminiscing about Baird Bay. We also visited the information centre that is not the ‘real’ info centre and were in awe when we saw the massive replica of a 5 metre Great White shark that was caught offshore from Streaky Bay  in 1990 on a 24kg line and weighed in at 1,500 kilograms, a world-record catch. However it was time to move on, so we headed off to find our next adventure and destination on our OZLAP………